By administratorMarch 2, 2016Blog, Report
No Comments 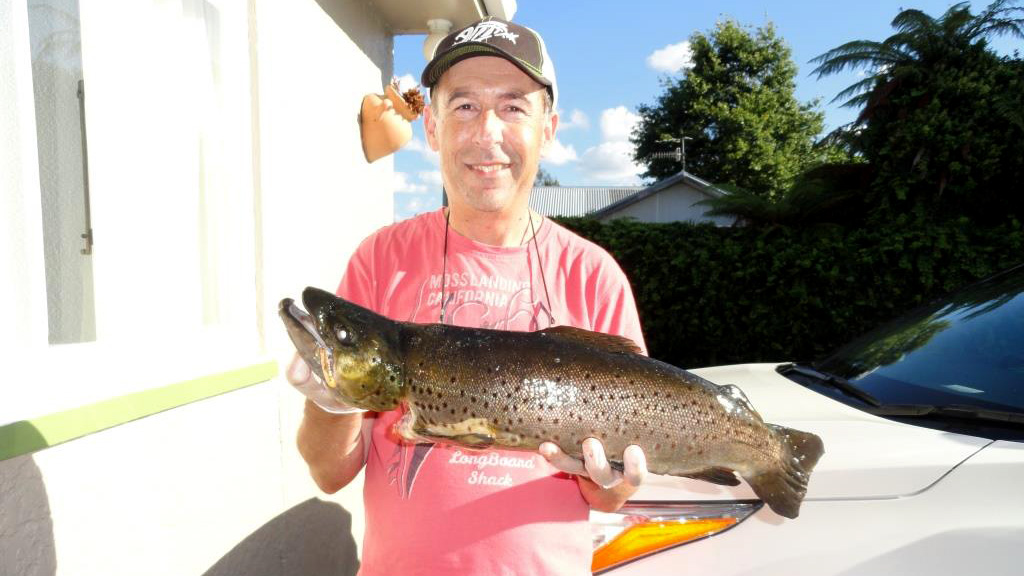 Club member Andrew Lipkewycz has just returned from another successful fishing trip to Rotorua New Zealand and has lodged a great report.

I fished this area last February and had a great time and thought I must head back there again. I had one week’s leave up my sleeve so I flew out on the 20th Feb and returned on the 27th. I stayed at the Waiteti Trout stream Holiday park, I’d recommend this to any visiting anglers, it’s got great facilities and the park owners are very hospitable and friendly. The other benefit; you have the Waiteti stream running through the park with Brown trout up to 12lb just cruising around and it has access to the Waiteti stream mouth which is 100m walk from the site. I fished two stream mouths, the Waiteti for Browns at night and the Awahou during the day for Rainbows (you can get Browns there as well during the evening). The Browns range from 2kg to 6kg and the Rainbows 1.2-2kg. In February the water temperature in the lake reaches 24 deg C, so the trout head to the stream mouth as the springs feeding the lake are at 10-12 deg C. The Rainbow’s school up and this year there was over 2 acres of wall to wall fish at the Awahou stream mouth. The week before I arrived there were reports in the local paper of anglers catching 200 fish per day, I witnessed people getting 40 in an hr. There were visiting anglers from NZ South Island, Australia, USA, Canada, Switzerland and Netherlands. This year the activity began on the 28th January and there were still thousands of fish on offer when I left on the 27th Feb although it had slowed. At the Awahou mouth I used Micro Woolly Buggers, Hares Ear Nymphs, Midge Pupa, the nymph’s were in a size 16, I also used a couple of Loch style flies like the Carrot Fly and Bibio Hopper, the Rainbow’s took whatever was cast to them. I was happy to catch 20 fish in an hour and a half then go do something else then fish the Waiteti stream in the evening for Brown’s. On the Browns I used Caddis patters as the sun set, then moth patterns, and when it got dark switched to Lumo Craig’s Night Time and Scotch Poacher. I didn’t get as many Browns as last year, I got a couple of Browns each night and some 2kg Rainbows, it was a full moon and the Browns were a bit cautious. The biggest Brown I got was 4.7kg and the smallest 3.1kg, last year I got a couple of 5kg plus fish and lost big fish that I couldn’t stop on my Sage One 5wt with 12 lb tippet. At the park I polaroided several large Browns that would have been in the 5kg range but were holding under Willow trees and pretty much difficult to cast too let alone extract if you did connect. I’ll be back there next year early February to get my fly fishing fix.